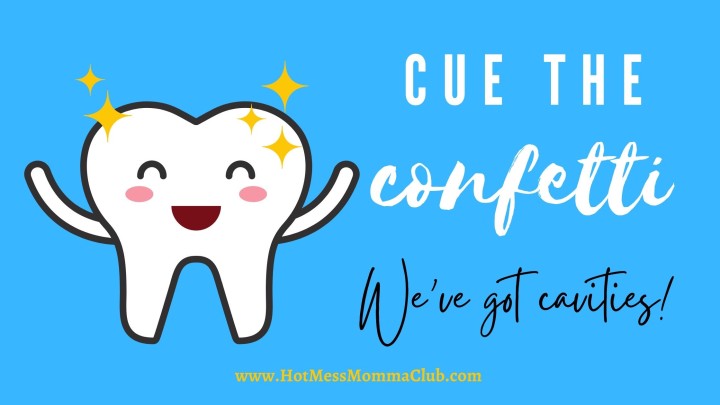 Y’all the SPED world is hard. There are more downs than ups, more hard days than good, and more headaches than smiles. SPED life ain’t easy. Mainly because things that are so normal & easy for most, are an absolute uphill battle for us. When a SPED kiddo has a win, no matter how big or small, it’s celebrated. That win is talked about and bragged on for the rest of the day, hell maybe even the rest of the week. That win will have a SPED mom on cloud 9 & feeling so damn proud. Today, I am here asking you to celebrate that QMonster has cavities! CUE THE CONFETTI!

Wait, what? Celebrating that he HAS cavities? Am I crazy? NOPE! On Tuesday, QMonster had a dentist appointment. I’ll be honest, I had put this appointment off until I could no longer come up with excuses. I was DREADING taking him to the dentist. We haven’t had the best of experiences at the dentist. You may recall that one time I left in the dentist’s dr coat because QMonster threw up on me….and honestly, that was probably the least embarrassing dentist appointment we’ve had. We’ve never left the dentist without both of us being covered in sweat and in tears. NEVER.

The amount of trust that is needed to let a stranger put unknown objects into your mouth while you have zero control is just a lot for Quin. Honestly, I get it. I myself have dentist anxiety. It’s actually pretty common for kiddo to be nervous at the dentist but Q’s anxiety is off the charts.

Leading up to the appointment, we had been mentioning the appointment & how it was a simple cleaning. The morning of I could tell his nerves were setting in. Turns out he carried that nervous energy throughout the day at school & spent a lot of time talking about the dentist with his SPED teachers. Once I checked Q out & we headed to the appointment, shit got real for him. He was anxious, whiny, nervous & on the verge of shutting down. I was honestly surprised I got him to walk into the office without any issues.

Once inside the office, he sat in the waiting room, still nervous & repeating the same questions about the drill, the process, etc. Once his name was called, we both went back. This is where my nerves kicked in because I just knew it was going to be a battle to even get him to open his mouth & let someone peek in. I was SHOCKED when they lead us to an open room, you know with another kid right beside us. Y’all, this is normal for typical kiddos but for us, this was a first! We’ve always been shut behind a door, in a private room, so as to keep the show behind closed doors.

Alrighttttt…I’m trying to think of the best way to ask the hygienist if she’s read his chart & is sure she doesn’t want to put us in a private room, when Q sits on the dentist chair. Uhm?!? Ok! We’ve never done that before! When he was smaller, it would take me and another hygienist to hold him still. Once he got stronger than me, we resorted to letting him stand or stand or sit in the “parent’s chair” to feel some sort of control. The hygienist, Kellyn, was so sweet and instantly caught on that logic was the best tactic with Quin. She told him she wasn’t a dentist so she couldn’t use a drill. She didn’t have her gloves on so she couldn’t touch him or his mouth. She just wanted to introduce her tools. She used Quin’s hand to demonstrate the straw, the water, & even shined up one of his nails with her toothbrush.

To be honest, if the appointment would have gone off the rails here, I would’ve still considered this a small victory because the tools actually touched him & he actually touched the chair. BUT, Quin amazed me by laying down and letting her use the mirror to look at his teeth. Kellyn then sat him up & let him taste-test the toothpaste to decide which flavor he liked. He then laid back down and let her brush his teeth. I almost died of shock right there. When I say I was holding back tears of pride, I was a split second away from letting the flood gates open as I watched my child have his teeth cleaned, with the motorized toothbrush, while laying down on the dentist chair.

After the brushing, she asked him about flossing. He initially said no so she asked if she could teach him how using her hand so he could do it at home. Once he flossed her fingers a few times, he flossed his teeth! I REPEAT HE FLOSSED HIS TEETH. We’ve NEVER done this before. Next, she asked about x-rays. I thought we had pushed our luck. The last time he had dental X-rays was when he was under sedation dentistry. Kellyn explained the X-ray tools & used all the logic with Quin regarding the weighted vest, camera, and X-ray. He did it! HE GOT DENTAL X-RAYS WITHOUT BEING SEDATED.

After he inspected his X-rays, he was nervous about talking to the dentist. He just kept associating the dentist with the drill. He was adamant the dentist couldn’t touch him & he was starting to amp up, nerves-wise. I was thisclose to telling the dentist to just call me & getting out of there before we saw fireworks….but before I could gather my things the dentist appeared. It took a few minutes of warming up, but Q came around and let the dentist do her thing!

Quin does have two small cavities, that we will have to do sedation dentistry on at some point…but for today, I’m not thinking about that. I’m celebrating! Hell, for today I am celebrating the damn cavities! Why? Because we found them! Because he did an exam and X-rays so that we could actually find the cavities! So, for today, I am celebrating those little sugar holes. Every time I think about it, even now while I’m typing this, I get tears in my eyes. I am just so damn proud of Quin! My son, my child with attachment disorder, let a stranger into his personal space with unknown intentions & didn’t jump into fight or flight mode. I can’t explain it but if you know, you know.

Not even going to lie, I just had to stop typing to have a few minutes to let my happy tears fall. I know that some of you are reading this and thinking “this lady has written a million words about a damn dentist appointment” or “this lady just said she was celebrating her son’s cavities, she is out of her mind.” I get it. I do. I know it seems like just another calendar entry to some. I know that others consider a dentist appointment successful when they say your kiddo is cavity-free. I know. But, in our little world, this was HUGE. Q overcame his fear, anxiety, & RAD at that appointment. Q found out he had 2 small cavities, but y’all he found out without running up a $3k dental bill for sedation.

I’m still letting my tears fall. They’ve evolved from tears of happiness to tears of relief. Relief that the appointment is behind us. Relief that maybe everything is going to be ok after all. Relief that Q beat RAD today. Tomorrow could bring another challenge, and honestly probably will, but for today, today we celebrate! Today, we’re celebrating cavities! What are you celebrating today?