“What is that smell?”-Said every boy mom, wife, & fur momma everywhere

Y’all, listen, sometimes my house just flat smells funky. I swear I am not letting my family live in a nasty home but for whatever reason it gets a little smelly. I mean the obvious place is the bathroom. I have a boy (and maybe a husband) who’s aim just isn’t quite at 100% yet. I have a dog who isn’t bathed as regularly as he should be. I have found milk cups, from God knows when, under my couch. Obviously, there are several contributing factors to the stink.

I have Febreezed my bathroom like a madwoman trying to mace a robber. I have spent ??? dollars on Scentsy wax to mask the smell of ick with “Sugar Cookie” aroma. I have bought some “odor eating” carpet sprinkle stuff to deodorize the carpet when I vacuum. I have burnt candles until there was nothing left but a wax ring in a glass jar. I swear, I have done it all. Short of burning the house down and letting the smell of bonfire take over, I was at a loss.

As you know, I have gotten a little “weird” in my momma ways. I cut most of the fake “stuff” from QMonster’s diet…and it worked with great success…So I returned to Pinterest to find out what other genius #momhacks those crunchy/hippie/granola moms had up their sleeve in regards to natural smell goods.  I am happy to report those “weird” moms had some great ideas….a few in particular were SO EASY I had to share it with you….

Vinegar. Literally that is it. Apparently, vinegar is a natural deodorizer. Listen, I don’t know the science behind what I am saying, I am just passing along what I read….but anyways, vinegar is the magic ingredient. You just need a cup of vinegar hanging out in your stinky areas to “fix” the problem.

I took some small mason jars I had collecting dust in the garage, some vinegar, a screw, and a hammer and made myself a few natural room smell good things (no fancy name…) I used the screw and hammer to make some holes in the tops of my mason jars (because a wide open container sitting around, no matter how high, will get spilled). I filled the jars with vinegar, replaced the perforated lid, and stuck them out of view in my bathroom, bedroom, and kitchen. Within an HOUR….my bedroom didn’t stink. It also didn’t smell like vinegar, which I was afraid of, and I know this because JHub, who will mention a new smell anytime I change my Scentsy wax, never said a word.  QMonster also didn’t mention it and he talks about anything “different” in our environment, including smells. I mean granted, it is no Sugar Cookie/Apple Cinnamon/Tutti Frutti bliss but its better than pee, wet dog, old milk! 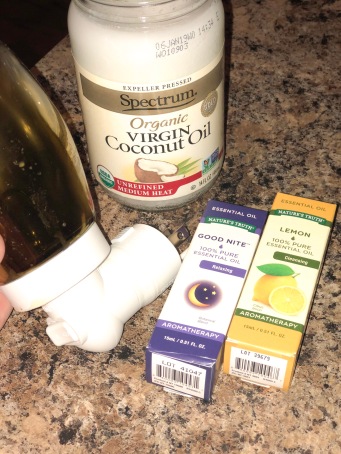 As far as giving your room a naturally pleasant smell, those “weird” moms have a hack for that too…they say, put some coconut oil (eye roll, I know, those crunchy mommas love their coconut oil)  and a few drops of essential oils into your Scentsy warmers and let it do it’s thing. I mean seriously?!? How easy is that?!? Now I have read that certain oils are bad for pets so do some research before you go oil happy. I got some coconut oil from Target and used a few drops of my lemon, though any combination of scents should work, essentials oils. I am happy to report that this little hack works well too.

The last hack I tried involved those same mason jars I mentioned above as well as some essential oils and some baking soda. The granola moms of the Pinterest world said to fill a small cup up with baking soda and put a few drops of essentials oils in there and let it sit. I tried this one. It was easy. I didn’t find that the lemon oil I used was as strong as when I did it in my Scentsy warmer, but I also didn’t smell the stink either so I am not totally calling this one a fail, just not a total win like the other two options.

So, there ya go, a few easy ways to get rid of THAT smell.  Bye bye smell. Bye bye chemicals. Anyone else have a genius #momhack to take care of son/husband/dog stench?

2 thoughts on “What’s That Smell?”