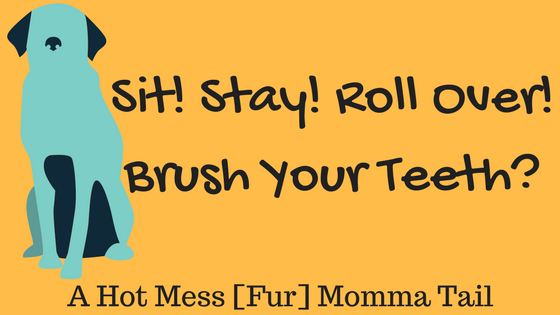 “Once you have had a wonderful dog, a life without one, is a life diminished.”
—Dean Koontz

I can’t recall a time in my life when I didn’t have a pet. Growing up, I had a few pets…hamsters, fish, cats, dogs. I remember some more than others. I remember my mom’s beloved cat, Kirby. I remember my dad’s favorite pet, Shelby. During my teen years, I acquired two dogs that overtime became my mom’s dogs. Once I was in college, living on my own, getting a pet seemed logical so I adopted a dog and named her Ella Lucy. In my early adult life, I adopted another dog, Henry (aka FurChild who is the 4th member of our household). Point being, I’ve had a pet, more specifically a dog, for most of life.

In all my years of dog ownership I’ve never one time heard of “scheduling an appointment to get the tartar build up removed” from your dog’s teeth. Not one single time. Sure, I’ve heard of those Greenies dog bones that are supposed to be good for your dog’s teeth. And in all honesty, I thought those Greenies were a crock of sh*t and they just claimed to have a “health benefit” so they could charge you an arm and a leg. I figured they were just some frou frou bone that some snobby rich lady bought for her Pomeranian while judging me for buying average everyday Milk-Bones for my mixed breed mutt.

But, that’s all changed. I can officially say, I’ve heard it all. The other day JHub dropped FurChild off at the vet for a much needed grooming appointment (A whole ‘nother topic. Never again will I acquire a dog that needs haircuts as frequently as me.) Once they finished with his spa session, they called to let me know he was ready for pick-up. The call went like this:

Vet: “Hey Leah! Henry is all cleaned up and looking sharp. I was giving him his exam and noticed that his ear is slightly pink. Have you noticed him scratching it?

V: “Looks to be a little infection. I am going to send some drops home with him. I also noticed his skin is getting pink around the paws. You know in the fall he had allergy issues. Sometimes dogs, as they age, have trouble with the grass and such when the seasons change. Looks like Henry is going to be one of those dogs. Do you need the allergy medicine filled too or do you still have some?”

M: “I’ll be honest, I am not the best dog mom at the present time. We still have some. I was less than diligent about giving him the pills last time. I’ll do better!”

V: “Perfect! Also, it’s not an emergency but sometime in the very near future we need to get Henry in for a dental cleaning. He has some tartar build up that needs to be taken care of to prevent tooth decay. Would you like for us to do that today or make an appointment for a later date?”

M: “Uhm, a dental cleaning? …(Confused) Oh yeah! (Trying to sound like less of an idiot dog mom) I’ll make that appointment when I pick him up today.”

After that call, I was torn between feeling like I was the worst dog mom ever and feeling like someone just tried to pull a prank on me. I felt like I was at the local quick oil change place & they were trying to get some extra money out of a dumb looking lady in an SUV. “Ma’am your wiper blades are going to need replacing very soon. Would you like us to take care of that today?” or the  “Ma’am, your air filter is awfully filthy, would you like us to replace that today?” I mean seriously? As if your services are not costing me enough you also want to upsell me on other services? This isn’t Micky D’s where a large fry and a super sized Diet Coke for $.55 is tempting. Since when did they teach Sales 101 in vet school?

Needless to say, I didn’t make an appointment for our FurChild to have a DENTAL CLEANING. Let me repeat that…. I DID NOT MAKE AN APPOINTMENT FOR MY DOG TO HAVE HIS TEETH CLEANED. Go ahead, judge me. I really don’t care. In all my years of dog ownership, I’ve never one time taken a dog to get his teeth cleaned. That is the most absurd thing I have ever heard of. I struggle each night to get my 5 year old to brush his teeth. I am damn sure not going to fight with the dog about brushing his teeth too. Nope…ain’t happening…I’m picking my battles and that is one I am not fighting.

Now before you go off thinking I am some crap dog mom who shouldn’t have a pet I’ll tell you, Henry lives a life of luxury. I promise. He eats Micky D’s chicken nuggets just like QMonster. He sleeps in a king size bed with the rest of the family each night. On a trip to Vegas, JHub brought THE DOG back his own blanket (Bc FurChild LOVES blankets). He has one of those large automatic food/water bowl things (And for the most part I remember to re-fill it before it goes empty). He has a huge back yard that he is free to run and play in (Though he wisely chooses laying on the couch inside where there is AC). Hell, if it is raining he won’t get off the deck and instead pees on the deck. If the grass is wet he craps on the concrete patio. Trust me, our FurChild is living a decent life, despite the fact that I refuse to make him a DENTAL APPOINTMENT.

Y’all that grooming appointment and checkup ended up costing me close to $200 (Thanks to medication and shots). Imagine how many fingers I would have had to chop off to afford the dental cleaning too! I also need to throw in props to JHub who not only remembered FurChild’s ear drops but also willingly got OUT OF THE BED and went to the kitchen to get said drops and came back and put them in his ear. He’s a good FurDad. I on the other hand am a Hot Mess [Fur] Momma!